Social justice, as a concept, has existed for millennia , but the youths of today have taken this concept to the extreme in creating the online phenomena of the ‘social  justice warrior’. Social Justice warriors also known as “SJW” are:

‘A pejorative term for an individual who repeatedly and vehemently engages in arguments on social justice on the Internet, often in a shallow or not well-thought-out way, for the purpose of raising their own personal reputation’(Urban Dictionary 2017).

The classic SJW is often thought to be upper-middle-class college students – picture themselves as persecuted, oppressed crusaders for peace and equality. A SJWs main platform is the internet, namely social media websites such as Tumblr, Twitter and 9gag which helps them to spread their narrow minded, and often badly thought out, thoughts onto the wider community. You see although they tend to think of themselves as warriors for the oppressed, upon any level of inspection this claim immediately falls apart when people realize that these claims are often blown things out of proportion. In particular, these SJWs focus on “racism” and “sexism;” often claiming things to be racist or sexist when in reality, they are neither of those. It’s almost as though they wake up every morning with “ruin everyone’s day” as the first thing on their agendas.

Social media holds a vast amount of power – especially over younger generations who basically live on social media. Recently, one of the biggest trends on social media has been the overwhelming presence of these social justice warriors. Though SJWs have always had a presence on social media but it seems they have come to a higher prominence in recent years.

The problem is that most SJWs believe that they are standing up for a cause that they believe in using a popular social media though in reality this is not always true. When in the hands of outspoken SJW,  the world of social media can be used as a tool to spread their, usually extremist, worldviews. Many social media sites have large amount of users, some examples being twitter with 330 million and facebook 2.07 billion (Statista, 2017),  who frequent the site usually on a daily or even hourly basis. This is the perfect platform for someone to express their views to the wider community. But what happens when these interpretations (not beliefs) a put online by a SJW? Generally these views cause fights between users which can cause fights turning the entire online platform into a battleground.

Through social media SJWs have succeeded in having an impact on the outside world. Recently, a new documentary aired on Netflix, entitled “What The Health.” A few months prior to its release, the soap company Lush released an Instagram post promoting the film.

This is one of the post made by lush that caught the attention of the SJWs: 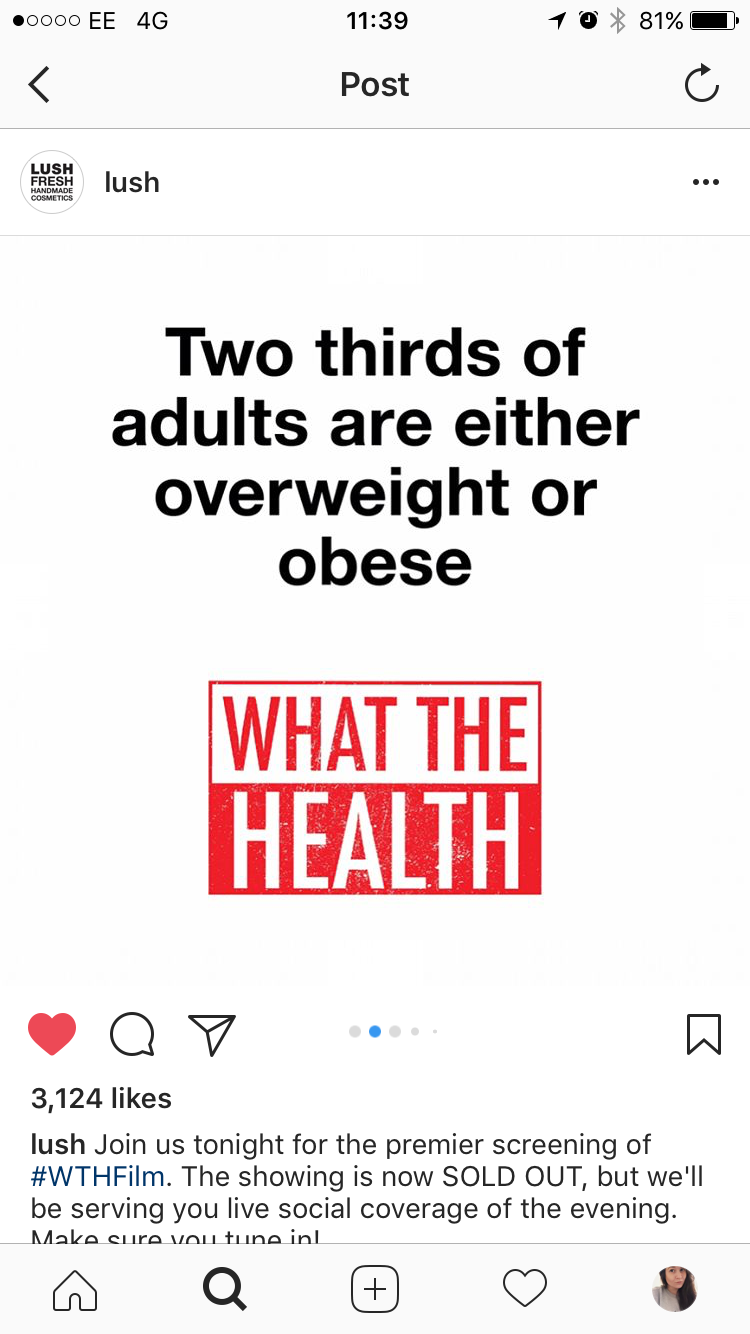 A quite popular topic of the social justice warriors of the internet is the topic of obesity. The phrases “fat-shaming” and “body positivity” were frequently used in the comments section of the original post. Those criticizing Lush seemed to have this idea that addressing obesity, and the health issues surrounding it, somehow insults those that are overweight. In response, lush was forced to change to content of the original post and  issue an apology to the public. The SJWs took it upon themselves to twist what was posted by Lush, harming the company’s reputation in the process.

Has sjw ruined something for you? Either turned you off something or ruined something like a fandom your part of for me no unless you count that the sjw mindset got to my sister. I do like SU but seeing as I’m not that a hard core fan and go to the SU subreddit so I have been able to avoid any drama about the show much. Though sad to see due to the show being a sjw dream it attracts sjw and causes unneeded flame wars.

In the two years that the thread had been online it has gained 159 comments about SJWs ruining things for people. One user stated that;

The problem is that in many cases, the SJWs have wormed their way into positions of influence (or at least become extraordinarily loud and obnoxious) and systematically started alienating anyone who doesn’t support those causes in the precise way they want it supported.

This is just one example of a SJW causing problems via social media.

It seems impossible at this point to log in to social media anymore without witnessing some sort of argument that doesn’t need to be occurring. Social justice is something that needs to be discussed since social issues are certainly a pressing matter, but picking fights on microaggressions and faux racism will not help us achieve the goals we aim to achieve.

reddit. (2017). Has sjw ruined something for you? • r/TiADiscussion. [online] Available at: https://www.reddit.com/r/TiADiscussion/comments/3oda11/has_sjw_ruined_something_for_you/ [Accessed 14 Nov. 2017].